4G technology has become an integral part of everyday life – it paved the way for the popularity and wide-ranging use of sophisticated mobile devices, providing a lightning-fast connection wherever you may go.

However, while we may use 4G in business and our personal lives every day, there’s still some confusion about what it is and why it is important.

In this article, we explore the question of “what does 4G mean”, how fast it is, and why it’s important.

What is a 4G Network?

4G is defined as the fourth generation of mobile technology which follows the 2G and 3G networks that came before it. 4G network architecture, while not as fast as 5G, offers significant speed improvements over legacy 3G networks. 4G is also sometimes referred to as 4G LTE, but this is not technically correct as LTE is only a single type of 4G network. It is currently the most advanced technology that’s adopted by the majority of mobile network service providers.

However, as you may have read, 5G is growing and starting to work alongside existing 3G and 4G data networks.

When it initially came out, 4G quickly changed how we use mobile internet. While 3G networks were relatively fast, 4G network connections allowed users to browse the web and stream HD videos on mobile devices, which basically turned smartphones into the computers of the modern age.

Today, you can perform most of the tasks that you could on a laptop or desktop computer on mobile devices such as smartphones or tablets. 4G networks ensure that no matter how much data you need, you can maintain stable speeds almost everywhere.

Standard 4G offers download speeds of around 14 Mbps, which is almost five times faster than what its predecessor, the 3G network, was able to offer. In fact, 4G networks can reach speeds as high as 150 Mbps, allowing users to download gigabytes of data in minutes or even seconds, instead of hours like with 3G networks.

Uploading data is much faster as well – standard 4G upload speeds are around 8 Mbps, with theoretical speeds reaching as high as 50 Mbps, while 3G caps off at around 0.5 Mbps. It’s a significant difference, no matter how you look at it.

Today, with data plans becoming more affordable, many users have blended the use of mobile and local WiFi networks since both exhibit similar speeds. Some providers even offer home-based 4G networks for people who want to have a mobile hotspot that they can take with them wherever they go. 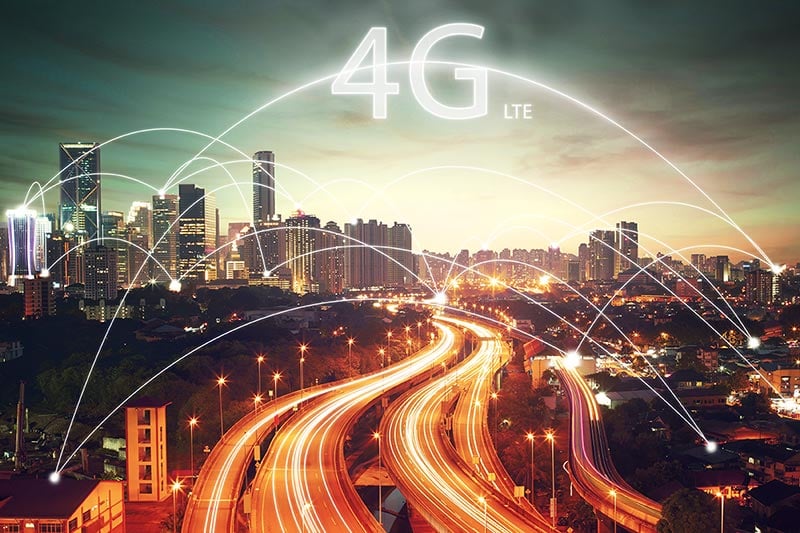 Why is 4G Important?

4G data networks have revolutionized the mobile industry and paved the way for the widespread use of today’s mobile devices.

Another advantage of 4G networks is its much lower latency. Low latency is important when real-time interaction is required, for instance, in video conferencing or online gaming. Unified Communication apps used on mobile devices remain clear, responsive, and fast – helping distant colleagues collaborate and work together seamlessly as if they were in the same office.

What’s more, 4G was also immensely useful in the Voice over LTE (VoLTE) industry. It provides a much more stable and clearer connection for voice calls, making it easier for businesses to switch to internet-based telephone systems.

A benefit to enterprise businesses is the ease and speed of 4G network set up. If a company needs to quickly set up a network in a new location, 4G can be installed in a matter of hours, compared to days or even weeks of setting up a wired connection.

Even the automotive industry has started using LTE-based car connectivity features, some even offering 4G network hotspots in their vehicles. Hotspots have also been shown to be incredibly helpful to remote workers when a WiFi connection isn’t feasible.

The importance and impact of 4G networks stretch through numerous other industries, as companies and individual users now have the freedom to stay connected in a less restrictive way. Mobile networks will become more important as new uses and applications are discovered.

Companies of all sizes find that a 4G network solution makes sense. The flexibility, speed, and reliability that it can offer are hard to match by any other type of technology.

Fusion Connect for Your Business

In this article, we’ve covered why 4G is crucial to both casual and power users, and from small to medium sized businesses all the way up to enterprises - all over the world.

If you would like help setting up your own 4G or 3G via wireless business broadband, Fusion Connect’s consultants are ready to help. We offer comprehensive solutions for businesses of all sizes and can help you figure out the best way to move forward. Contact us today!

Cybersecurity must encompass every aspect of your network including any devices that connect to it....

Log4j Zero-day: What You Need to Know and How to Protect Yourself

On Friday, December 10th, a critical vulnerability was publicly disclosed in the open-source...

There’s been a lot of talk lately about the urgent need to replace POTS services. Is it true? Is...

How to Prevent a Data Breach

Data breaches are more than scary; they have the potential to alter the trajectory of your...